I hope ya’ll like what I’ve been cooking cause you’re gonna be seeing a whole lot more of it! I am a cookin’ fool these days and just have tons of ideas rolling around in my head. And a whole lot more are pinned on my Pinterest Foodboard! SO go ahead and get cozy while I tell you about my little tamale making extravaganza I had last night. The finished product come out a-looking-lika this: 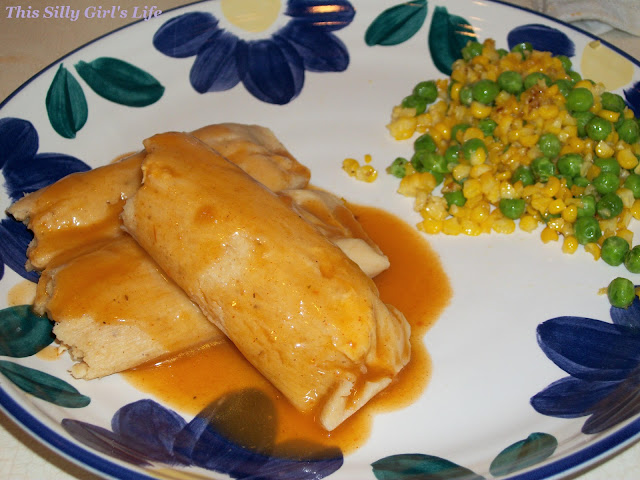 This was only the second time I have ever made tamales from scratch. The first time was with my dad about a year ago and they came out great, even though we actually got the wrong masa (we picked up the masa you use for making tortillas, silly us) but like I said they still came out awesome. So, I thought I would try it again by myself this time and I was not disappointed at all! I thought they came out delicious, I even made a nice sauce to go on top as you can see in the picture. However, Jeremy wasn’t as thrilled about them. He was picturing the kind that we get at one of our favorite Italian beef stands, Johnnies in Chicago.  I tried to explain to him before hand that it would be totally different but I guess he just couldn’t get that version out of his mind. So, if you are like Jeremy and don’t like that corn flavor then you probably won’t really enjoy these either. (If you like corn tortillas you’re good to go!) So now on to the steps:
First, I started out making my filling in the morning. I simmered a chicken with 2 tomatoes quartered, 2 celery stalks cut in big chunks, 2 carrots cut in big chunks, 2 limes skin removed and halved, half bunch of cilantro rough chop, 1 Tbls pepper corns, 1 small can tomato sauce, 2 dried bay leafs, 1/2 medium onion large chop, 2 Tbls paprika, 2 Tbls ground cumin in a large pot and covered with water. 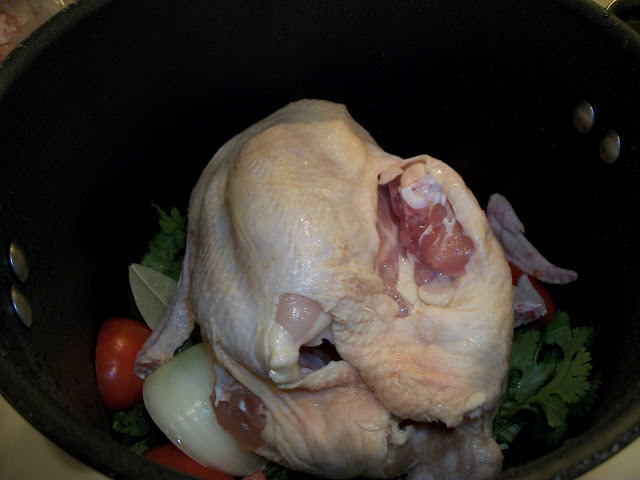 This simmered for about 2 hours then I took out the chicken and set it to the side to cool. Strained the remaining ingredients but kept the tomatoes and saved the liquid to let cool. Once the chicken was cool to the touch I shredded the whole thing, mixed it with 1 tsp paprika, 1 tsp ground cumin, 8 oz shredded Colby jack cheese, 1/4 cup of the remaining liquid from cooking and salt and pepper to taste. I set this on the side while I got my masa ready. 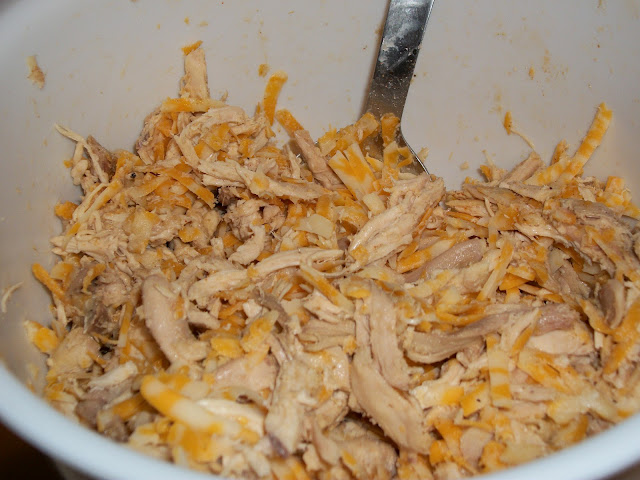 I mixed my masa dough to the directions on the box, I used the reserved liquid from my filling and used that instead of the stock. I did add a bit more of the masa flour because I saw a tutorial on YouTube where it says it’s suppose to float in water and it looked a lot thicker than mine. Mine still didn’t float in water but I just went with it, I couldn’t find that exact consistency so I just figured I would either mess up or would be rewarded with deliciousness, and I was. Here’s what my dough looked like: 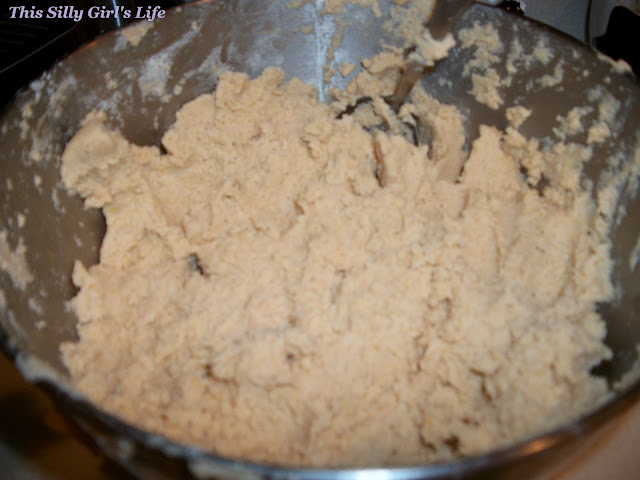 Before hand I soaked my husks in warm water for about an hour to make sure they were pliable.Then I started to assemble. Make a layer about 1/4 inch thick of the masa dough in the husk, but about 1-2 Tbls filling and then wrap it up making sure the masa covers the filling all over. Do this until you’ve used everything up. You will probably have a ton of corn husks left over. 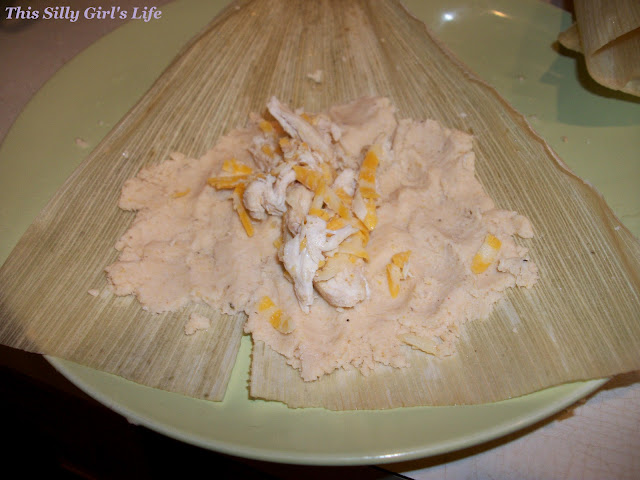 Place your new little bundles into a steamer and steam for 1 hour. Take them out individually with tongs because these babies will be hot! 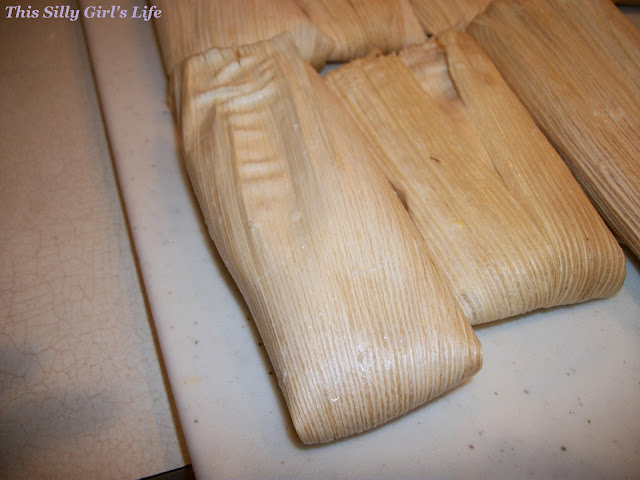 For my sauce I took the remaining reserved liquid and boiled it until it was reduced by about 2/3 leaving the tomatoes in as well. When it got concentrated enough for me (keep taste testing) I used my immersion blender and blended the tomatoes in it til it was smooth. I also added additional paprika, cumin, salt and pepper as well to your taste. I thickened it with a little bit of cornstarch slurry as well. 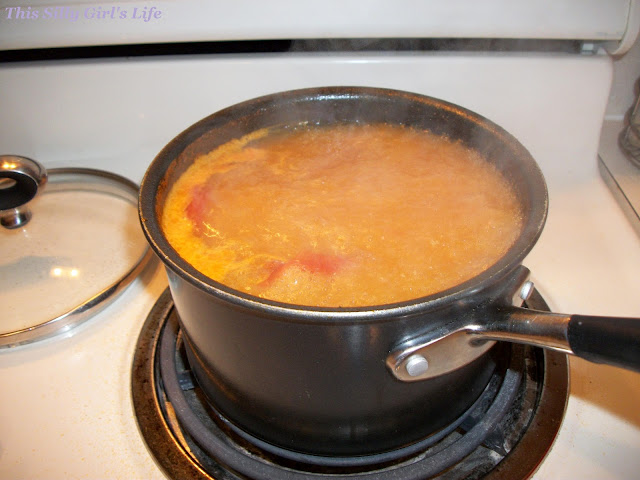 While hubby wasn’t so thrilled about the tamales he really did love this sauce I made! So either way, this might not be your taste but I sure did love them and made enough to freeze. I take a few out for lunch and place in a 350 degree oven for 30 min and still delicious! I hope you enjoy these! 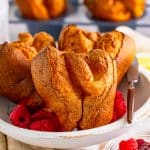 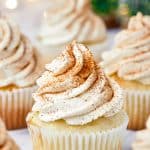 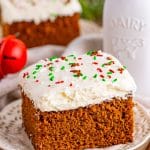 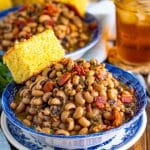 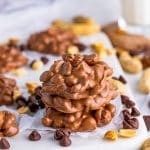 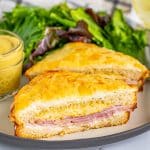